skip to main | skip to sidebar

The difficult part of being a RancHer

So, FarmHer asked us to describe why being a FarmHer or RancHer is difficult.
FarmHer.com is a great website & gal who is helping promote women in agriculture by sharing their story though amazing pictures.
I was going to say that MY perceptions of how others view me as a "girl who takes care of her husband's cows" affect me.  You see I think MY perceptions affect me more than what anyone else thinks.  As I filled my truck with diesel this week, I had my husband's wallet in my hand to pay.  A man mentioned asked me if "He's letting me drive his truck today?"  I just replied, "Nope, I'm just letting him pay for my diesel today". The gal behind the counter just laughed because she sees me hooked on to that 40 ft trailer each week.  I think his comments (and other's opinions) make me better.  They drive me to be better & do better for my cattle.
Then, today happened.  Today being a RancHer was really difficult.  I think more difficult because I AM a female.  Today we lost a little lamb. A lamb we have had in the house for two weeks.  A lamb the kids have love on & played with.  A lamb that I have been feeding every two hours through the night. 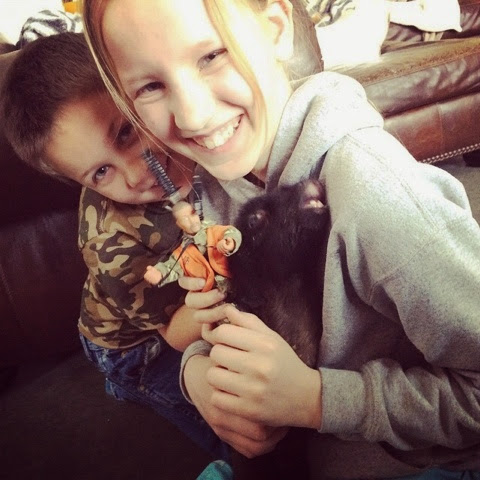 I lost it.  I cried & cried.  I cried for the lamb, I cried for my loss, I cried & sobbed for the kids's loss.  That is when being a RancHER is the most difficult.  Because I am a female it makes the losses a little more emotional, personal.  Please don't misunderstand, my husband was sad that the lamb died.  But I do think most men tend to be a little better when handling these losses.
But, I also think these same emotional maternal qualities also make me a much better RancHer.  I get more attached.  I rely on my fEELings (like maternal instincts) more.  Meaning that sometimes to get a fEELing that I need to go check something out.  9 times out of ten, I find a calf or cow that needs a little help.  I also am the RancHer in this house who has always done the night checks.  Because I stress & worry more with heifers calving, or cows calving on very cold nights.
That caring, emotional side is a blessing and a curse as a RancHer.  Today it hurts, but it will help drive me to be a better person, mother & RancHer every day.
~Shanen - Momma to the Mama cows (& All the creatures) at the ECC
Posted by GreenRanchingMom at 7:20 PM 1 comment:

I love this life

As I sit here it's 9:30 am.  I'm in Barnes & Noble in the big city drinking a Chai latte. I'm in my fancy Buckarette Collection Stormy Kromer & a big beautiful scarf. 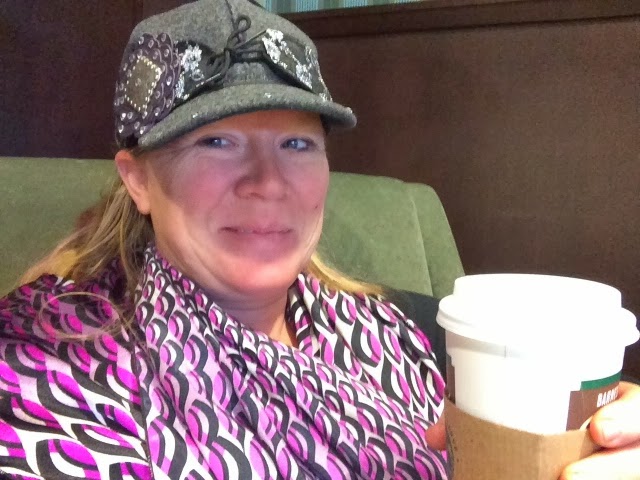 I'm surrounded by business men & women with their laptops & fancy clothes working.
That. Used. To. Be.  Me.
Wow! 13 years ago that was my life. I hadn't even dreamed of my current life as possible!  Don't get me wrong; I enjoyed talking with my customers & helping them get to their goals.
But. My.  Life.  Is. So. Blessed.  Amazing!!
Yep, yesterday I spent 10 hours in the truck hauling hay & alternately freezing my fingers off feeding cows & stacking hay.  After basketball practice & chores then house chores I fell into bed at midnight. This morning I rolled our of bed lazily at 4 am to load a cow & drive up to the new Story City Locker. When I get up that early I don't turn any lights on in the house. So, the scarf & hat are necessary. I'm lucky to brush my teeth on my early days. Once the cow was delivered, I need to pick up some shoes for my boy in the big city. This the Tea break while I wait for the store to open. Then it's back home, feed the cows, check the other cows, load Missy & Buster (show heifer & Sale Bull) to take them to get their feet trimmed. Then chores.... You get the idea; busy, dirty, cold.
I love this life. Really! Thanks to all the businessmen & women that make it possible for me to raise your food & live this life.
Love where you are. It will lead you to bliss.
GreenRanchingMom
Posted by GreenRanchingMom at 8:09 AM 1 comment:

To the Mom who hasn't brushed her hair in a week

This was written in November 2013. It is now My birthday in August 2014.
It is still true.
Part two is now languishing in drafts.
I blame the Crown for lettin me publish - and Kim :)
This is for The Mom who hasn't brushed her hair in a week
Huh? How is this possible.
Well, it is. As of right now, I can't remember when I last brushed my hair.
I've finger combed it for a second.
I've washed it.
I've pulled it up in a messy bun.
Ponytails & loose braids are my best friends.
Hats, yes every kind of hat is a near necessity.
What does this mean I've become?
Lazy?
Careless about my appearance?
Fat?  Huh-that adjective just popped right out? Wonder what that reeeally means?
A    m.o.t.h.e.r.
Yep, being a mother means that you put others before yourself.
But, if you don't take good (adequate) care of yourself how can you care for your family?
This first part is real. I've let myself sit with this revaluation for two weeks now.
I decided to brush my hair.
I decided that I should take time to look, really look at myself in the mirror.
I decided that.  I should meet that person in the mirror, because I don't have a clue who she is.
I decided I need to like what I see in that mirror.
Posted by GreenRanchingMom at 7:28 PM No comments:

Be a CowPuncher at the Ebersole Ranch

Would you like to be a CowPuncher at the Ebersole Cattle Co?

First, what IS a CowPuncher?

The dictionary defines it simply as a Cowboy.

To us a CowPuncher
Many of you have asked for a Beef CSA, or a way for you to fill your little refrigerator/freezer with beef each month.  So... Here We Go!

As a CowPuncher you will get a Punch card that lets you CHOOSE your monthly beef options.
~Delivery to East Village in Des Moines each month
~You don’t need a deep freeze to fit all your beef!
*~*You will also get special access to Ranch work & activities like cattle drives! 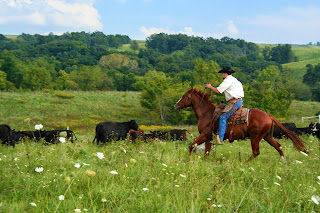 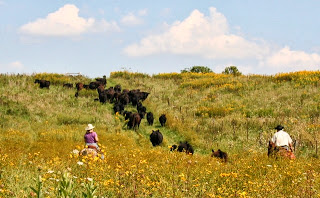 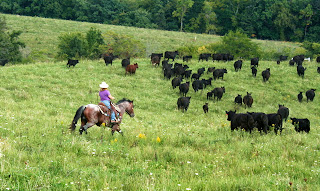 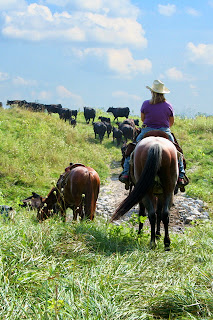 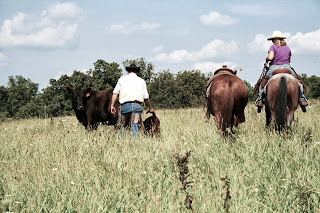 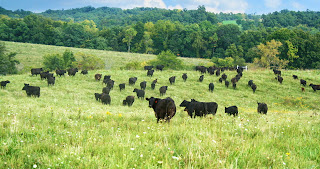 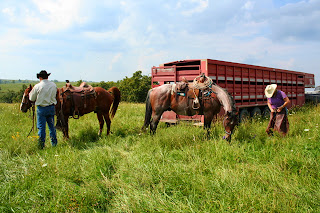 
Remember - YOU get to choose what you would like delivered each month!  Your total CowPuncher Card will include about 1/3 Steaks - 1/3 Ground Beef - 1/3 Roasts & Special Cuts

Posted by GreenRanchingMom at 4:33 PM No comments:

The past year has been a whirlwind.


Last summer my main goal was to make our little bitty old house into an inviting loving space. So I ransacked every single room. One by one I sorted everything. All the trash was tossed. Good things donated, stuff I "couldn't" get rid of went to the semi (our storage) & only the things we used every day were left.

August 19 was 2 days before school started. I has ALL the laundry done & convinced Beau to help me rearrange furniture. We loaded up the kids & headed 15 miles away to mow hay (I followed the tractor in the truck). Tractor gave us fits & so we went to check cows.

We were a mile back in the pasture when JP our neighbor calls us.
"Whatcha burnin?"
Nothin.
You're burnin something, I'll call you back! He says.
We then start out the pasture, shutting gates as we go.
JP calls back, nearly in tears. "I'm sorry honey, it's your house"
He then explains that the electrical wires are jumping & sparking. Roger was with him & he finds the electric shutoff at the pole & turns it off. Very dangerous! I stumble & babble through warning him that the grill had 2 brand new propane tanks. JP said they were going off bright & pretty (he is such an upbeat guy)
We let him go. Shut the last gate, and headed for "home".
The next neighbor Spence calls: "Whatcha burnin?
Beau in response "Apparently the house"
"Oh crap, we'll be right there"

The girls were nervous because they didn't know if it was the barn. Their horses were tied up. They were somewhat relieved, because no animals were lost.
Wyatt cried, named a toy, cried, named a toy & repeated the process all the way home. I couldn't help comfort them other than talking because we were driving so fast. When JP saw the house he knew it was too late to save anything.


The picture is what we saw when we pulled up. I took one with my phone. All the neighbors were there. More arrived to help as the night went on.
Crazy.
We are all ok.
Could have been much worse.
Even this many months later, my stomach still turns when thinking about that ride home.
Thankful for such amazing people. 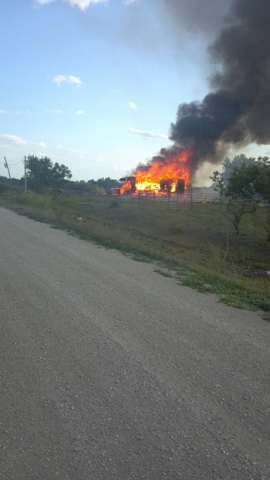 Posted by GreenRanchingMom at 9:39 AM 2 comments:

Promote Your Page Too

What is GreenRanchingMom doing right now...

What is GreenRanchingMom doing right now... 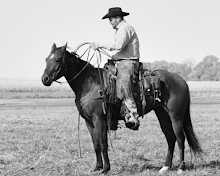 GreenRanchingMom
Rural, Iowa, United States
Ranching wife to Beau, Mom to A.Cowgirl, J.Cowgirl, and Squeak. We run cows, horses, dogs, a cat and kids. I take care of all that and haul pigs 2 days a week. We raise Maine-Anjou & Angus cows. We sell Replacement Females & Beef